Written in Japanese and translated into English by Hajime Ozaki
A copy of original article, published in 27 newspapers throughout Japan, is included below

If it were not for the Indian music, Steve Oda might not have stepped on the soil of Japan, the land of his grandparents, for life.

Oda, 73, a third-generation Japanese Canadian, was born in Toronto, Canada. His parents were the second generation “Nikkei,” a word to characterize those of Japanese origin, from Vancouver. At the start of World War II, Canada followed the United States to declare war on Japan, treating Nikkei as “enemy aliens” and forced to relocate about 20,000 of them from its Pacific coast states.

Oda’s father, Joseph, was forced to move to Toronto, while his mother, Yoshiko, spent a hard time in an inland internment camp. However, Oda does not know much about his parents’ upbringing or war experience. “Whenever I asked them to talk about their personal history, they would tell me that I didn’t need to know. Probably because their experiences were so painful to remember,” Oda recalled.

The Way to Express Myself

His parents intended to raise Oda and his five-year younger brother as Canadians. They spoke in Japanese between themselves but did not teach the language to the children. “I was told to be excellent, but not to stand out. In my high school, there were only two or three Asians. I was the only Japanese and the rest were Chinese. It was impossible not to stand out,” Oda laughed.

Oda showed his interest in music from a very early age. He started to learn slide guitar at the age of six. “I really wanted to learn the piano, but my family couldn’t afford it,” he recalled. “I loved to express myself through music more than anything else,” during his youth. Music was a blessing to the young Oda, who knew neither his native Japanese language nor family history, living in an environment where he was compelled to feel a sense of inferiority as being a Nikkei.

He was immersed in jazz during high school and college, and whenever he had time to do so, he went to New York by bus and hang around jazz clubs to listen to the likes of John Coltrane at its peak. In 1967, Oda came across the performance of Ali Akbar Khan, a master of Indian string instrument Sarod in Toronto. “This is the music that influenced Coltrane! I remember I felt like hit by lightning,” he remembers the experience vividly.

The young Oda wanted to be a musician but got a job instead at a power company with strong endorsement from his parents. His passion for music did not go away, however. In 1969, he met Ravi Shankar, a sitar master who visited Toronto and appealed that he would like to become a disciple of Ali Akbar Khan, Shankar’s brother-in-law.

His enthusiasm prevailed. In the following year, Oda started learning sarod from Khan’s eldest son, Aashish, in Los Angeles. From 1973, he became a direct disciple of Maestro Ali Akbar Khan, and would visit his music college near San Francisco on a vacation basis for about 20 years until he retired from the power company. When he retired, he moved to a suburb of San Francisco, home to the music school founded by Khan, to concentrate on music.

As an Indian musician, Oda is a late bloomer. In India, training often starts at the age of three or five. Many make their debuts young as professional players. Despite handicapped by age, the performers who are fascinated by Indian music spread across the globe, regardless of nationality or race. Ty Burhoe, 55, an American living in Colorado, is one of them. He started playing Indian percussion Tabla in his 20s. He was introduced to Oda by another Tabla player and was attracted by Oda’s “delicate performing style and gentle personality,” and began to play together. Burhoe played a critical role in bringing Oda to Japan for the first time in 2007.

Taro Terahara remembers the first note of Oda’s Sarod that struck him in the soundcheck of a concert that was held in Uonuma city in Niigata prefecture that year. Terahara, 51, a Bansuri player who greeted Oda in Japan was overwhelmed by his tone. “I couldn’t stop tears coming out. Amazing. Beautiful. The depth of the music that he can dive into with his first single note is unparalleled to anyone else’s. How come he, a non-Indian musician, can produce such deep sound?” he wondered.

If one can compare the brilliant Sitar’s tone to sunlight, that of Sarod would be characterized like moonbeams. “His performance exposed honestly and sincerely how much he had devoted himself to the music and how much he had accumulated the practice. I was knocked down,” Terahara said of his first joint performance in Uonuma.

After that performance, Oda started to talk about his grandfather, Mosaburo. “He had come from a place of which name starts with” Sa,” Oda showed his limited knowledge of his grandfather. Terahara and his wife, Yuriko offered to help to locate the place, thinking “Only we can do the job.” Examining the family history materials that Oda was keeping, and searching immigration databases for a couple of years, the couple identified Mosaburo’s birthplace. It was Sashima, a tiny island in Setonaikai (Seto Inland Sea), which belongs to Ehime prefecture in the western part of Japan. Mosaburo emigrated alone to Vancouver in 1887 at the age of 19.

In 2014, Oda, together with the Teraharas, landed on Sashima for the first time. The sea was serene, and the landscape was beautiful. “Why my grandfather had to leave such a heavenly place?” Oda wondered. The answer to his question is yet to be discovered.

Oda revisited the island in April last year. He held a “homecoming” concert with Terahara and others. About 30 islanders gathered in the main hall of Saihouji, a Buddhist temple. Shigefumi Oda, 93, a relative living on the island, was among them and listened to the exotic Indian music.

Oda chose “Mishra Mand” from Rajasthan, India for an encore song. At the end of the performance, Oda inserted the melody of the popular Japanese folk song “Furusato”. Terahara immediately recognized it and followed with his Bansuri, encouraged several audiences to whisper the lyrics.

It was the moment when Oda pulled Japan, which used to be a remote country, toward himself with the thin strings of his Sarod that crafted that melody.

Sarod has four melodic strings, six rhythm strings, and fifteen resonant strings. Oda’s journey that brought him to his grandfather’s birthplace is like a story. It is as if Oda played the main melody and the people who resonated with it complemented and completed the entire story.

Japan was a far nation to Oda. Japan had always been out of his mind until he passed 60. Neither Burhoe. He did not invite Oda to a performance tour to Japan for Oda’s Japanese origin.

“Was it just an accumulation of coincidences or was I led by anything?” Looking at the back of Oda, who was watching the sunset beyond the dark shadows of the islands, I imagined he was asking such a question to himself, filled with the quiet sensation that the long journey of three generations came to an end. 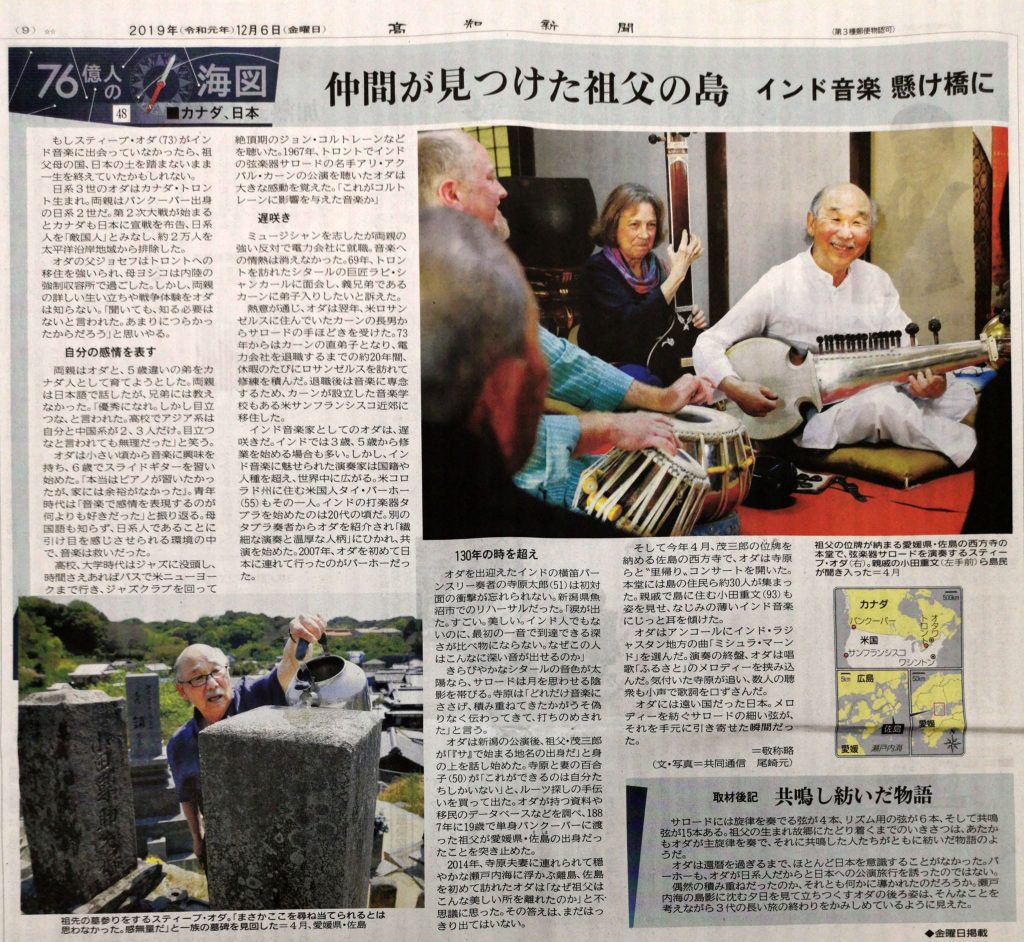